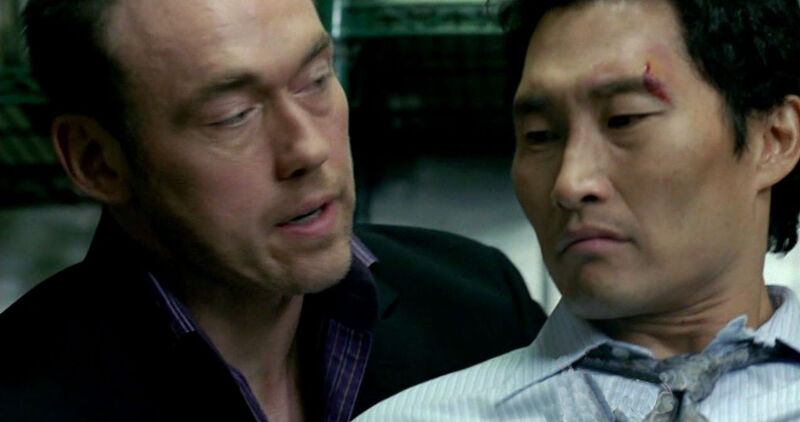 “Dude, did you just say, ‘Just in case you figure out what’s about to happen to the island,’ or am I hearing things again?”

Many spoilers ahead. If you have not watched all of LOST including last nightâ€™s episode, â€œThe Package,â€ you should move along. Thereâ€™s nothing to see here.

Once again, Doc Jensen — the Fox News of LOST reporting — has gone off the deep end. This week he claims that Isabella speaking to Richard Alpert in “Ab Aeterno” was actually The Man In Black. So what he’s saying is, MIB as Locke strode into the beach as a ghost that only Hurley could see, convinced him to go after Alpert, and then communicated to both Hurley and Alpert as the same ghost, instructing Richard to kill him? Sorry, but that doesn’t make a lot of sense to me. A few paragraphs later, Jensen poses the question of who exactly was being quoted when MIB/Locke stated, “A wise man once said, ‘War is coming to this island.’ I think it just got here.” Uh…it was obviously Widmore, Mr. Jensen. Season 5, Episode 7. Re-watch it. You’ll understand. It was right around the time your columns jumped the shark.

So, let’s chat about “The Package,” shall we? Last night we learned that in order to leave the island, The Man In Black needs to gather the six remaining candidates. The most obvious reason for doing so would be that he needs to kill them. I’m not quite sure why he can’t leave if one or two stragglers remain on the island, but with six episodes and seven hours of LOST remaining I think I’m finally learning to stop thinking of any more new questions and focus more on how the show is fairing at answering all the old ones.

A couple weeks ago I promised that I would no longer make any “the flashbacks aren’t really flashbacks and the sideways flashes aren’t sideways flashes” arguments, but if you still believe I’m wrong, re-watch the flash that follows Sun awakening in her bed next to Jin immediately following her slipping into unconsciousness on the island. And — Jesus Christ — if you haven’t made the connection between Sun “flashing” to the island from LA X time and back and Desmond flashing in “Flashes Before Your Eyes” you really, really need to go back and watch that episode. Or re-watch the episode from Season 3 where Locke loses his voice and dead Boone guides Locke through his vision quest. I imagine you’ll be agreeing with those of us who fight tooth and nail to show people that we’re not actually seeing flashbacks in these flashes. There is crossover. There are consequences to actions in each. I don’t know how they’re going to connect yet, but when they do I think it will all be made very clear to everyone.

Anyone who doubts that Charles Widmore has good intentions at this point worries me. I fear you might have some sort of mental defect. The man we saw last night does not strike me as a man who is simply searching for eternal life (I’m looking in your direction, Jensen) or a man who wants to control the island for his own personal wealth. Last night I saw a man who seemed genuinely adamant about defeating the Man In Black and keeping the apocalyptic scenario he lays out to Jin from coming to fruition. Think about it. Widmore helped orchestrate the life of Daniel Farraday, and he told Desmond about Eloise Hawking, who told Desmond (along with the Oceanic Six) how to return to the island. If Widmore’s interest was purely selfish, why would he deliver Desmond to Eloise, whose plan required everyone to return to the island. My guess is the hardened, angry old man we’ve seen in different timelines dealing with Penny and Desmond and Ben was doing so much like Eloise was with her son. He’s acted in ways that would help steer people towards their destinies. I think in future episodes (maybe even next week) we’ll learn that what he’s doing — trying to make sure that “everyone we know and love” does not “simply cease to be” — is for a truly good cause.

Electromagnetism, eh? That’s so Season 5, am I right? Nevertheless, you can rest assured we’re going to hear a lot about it in the next few weeks. One of the big questions to arise from “The Package” was, “What’s the third pocket of electromagnetism on the map Zoe shows Jin?” We already know about the Swan hatch and its electromagnetic properties. Same goes for the Orchid. So, where’s the third spot? My guess is the beach. There has to be some other significance to Jack and Ilana’s party returning to the place where everything started than a clever nod to LOST‘s origins. Nate suggested the Lighthouse as an alternate energy spot. Someone else suggested a volcano. I don’t know, seems kinda stupid. I like the idea of the beach. Jin will know, so we’ll know in time. As for the purpose of the electromagnetism in relation to the capture or detainment of the Man In Black, I have no idea. I think it’s more about putting Desmond in one of those places than putting MIB there. He needs to travel across alternate universes to do something. He needs to flash before our eyes and pull some crazy constant variable shit. Other than that…uh, I don’t know what makes him uniquely special or miraculous. But I’m sure Farraday was speaking the truth when he said that.

Did anyone else notice that as team Jack begins to gear up and sail over to Hydra Island to blow up the plane, it’s getting kind of dark out? I think next week or the week after we’re going to see the group caught in a rain storm, and we’re going to learn just who Juliet shot and killed during that brief Season 5 time flash when a gun fight broke out between the time travelers and an obscured outrigger full of unidentifiable foes. Say goodbye, Sun!? Gunshot in two alternate universes. Man, that would suck. Or, you know, it could be Richard Alpert. What more do we need to learn about him? What other purposes could he serve?

Speaking of things that could suck, how about if one of the upcoming episodes is devoted entirely to Rose and Bernard. Ouch. What a waste of an hour.

That’s enough for this week. We’ll have lots more to talk about next week.