So…the Blue Hill At Stone Barns website states that the restaurant discourages photography during meals. All of the photographs featured in this post are taken from other sources. I’ll try to give credit where I can. Here goes!

When my mother was in town a few months ago we conversed about how we always eat at nice restaurants in Los Angeles, and how when I lived in Jersey I never cared about food. She asked if I wanted to eat anywhere special the next time I came to town, and I half-jokingly mentioned Blue Hill At Stone Barns. She said she’d do her best to get us in. The only reservation she could obtain was at 9:30pm on a Thursday. Then she called back to tell them I was a blogger from LA (ha!) and they should keep that in mind if they had any earlier cancelations. On Monday they called with a 6:00pm opening on Wednesday. We took it. My sister got really offended, saying, “Why do we only eat at nice places when Evan is home? Every other night mom just opens a can of tuna fish and leaves it on the counter for me. It’s like I’m a cat or something. ‘Oh, the can of tuna’s gone, I guess she’s fine.'” So we took her along, too.

…If you don’t know about Blue Hill, it’s in Tarrytown, New York. It’s a four-season farm which also houses restaurant that sources its menu from the surrounding fields and pastures as well as other local farms. The only menu options are a five-course, eight-course or twelve-course tasting menu designed by the executive chef Dan Barber (he’s been a guest judge on Top Chef several times, and Blue Hill was used at least once that I can remember as a setting for an elimination challenge). The dishes are wholly unique from day-to-day depending on what is fresh and ready to be served, and what (if any) a diner’s allergies or dietary restrictions might prevent them from consuming. Guests are presented with a list of over 100 ingredients, updated daily, which contains the best offerings from the farm and market. It might just be the most literal example of the “farm to table” ideology in American cuisine. You’d better believe I went in there saying “no restrictions.” I wanted to be surprised, I wanted to try new things, and I wanted to eat exactly what the chef intended to serve.

The three of us chose the five-course tasting menu ($108 each…it’s definitely a fine-dining restaurant, I even had to wear dress pants and a collared shirt). Our meal began with three shot-glass sized portions of what the waiter described as Blue Hill V-9, a nine-vegetable drink. I tasted tomato, cucumber, and celery but my palate wasn’t refined enough to figure out the remaining 6 ingredients. There was probably fennel in there, because fennel was included in almost every dish last night. 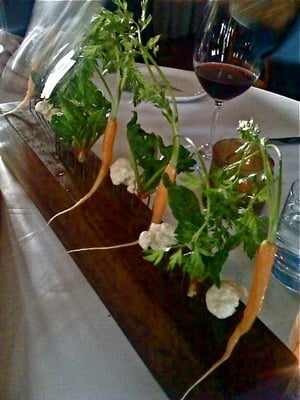 Next came a platter of fresh garden vegetables, which were served skewered on an ornate wooden box. There were carrots, fennel, cauliflower, a purple cauliflower, and what looked like a green onion or gooseberry or something. I probably should have asked what it was since it was the best taste of the bunch.

Another amuse was a lightly fried Adirondack red potato chip that had what appeared to be a basil leaf cleverly woven into it. Following that we were given lightly fried wax beans. The tomato slider (ordinarily made with beets but mom said “No beets” so I can’t help but think I was given tomato because of her) was the best amuse of the night. I don’t know how that thing was prepared but it was way more complex than a tomato on the smallest sesame seed bun ever. The next plate included a combination of pistachio sausage and duck salami. The salami was amazingly rich and fatty. 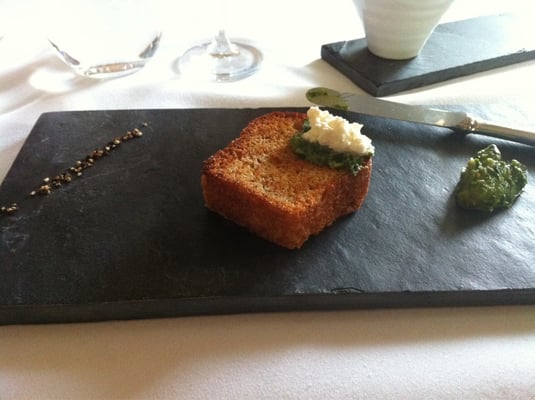 The first carb offering of the night was a four-grain brioche with herb marmalade and cracked pepper with a side of fresh ricotta. The marmalade was a lot like pesto. The ricotta made it from cow to table in less than a day, and it was the most phenomenal, freshest cheese I’ve ever tasted. Discussion around the table was whether or not it was rude to spoon the remaining cheese out of the bowl directly into our mouths. Had this been a dinner club meeting and not a meal with mom and sister, the adage “always scrape the plate” would have been recited and — actually if this was a legit dinner club meeting we would have already been kicked out of the restaurant for being too drunk.

Our first course was a salad using fresh ingredients from the farm that looked like a work of art. Each vegetable was meticulously placed to cover the entire surface of the bowl, and although there may have been a touch of balsamic or oil on the plate, the salad was not really “dressed,” but formed using little smears of what tasted like a homemade peanut sauce and a light mayonnaise, which doubled as a glue bonding the ingredients to the plate. The salad included turnips, radishes, fennel, apple (maybe pear), mache (I think!?), bok choy (seems about right) carrots, and the sweetest, most delectable green beans ever. Funniest quote from the salad course. Mom asked, “What do you think that thing in the middle of the plate is?” I answered, “I think it’s a turnip.” Mom shot back, “I know what a turnip looks like!” then she tasted it and said, “That…was a turnip.” Classy broad!

Second course was a very lightly grilled (almost raw, but just warm enough with a nice top-sear) wreckfish over manhattan clam chowder. The chowder included a touch of lobster meat, one mussel, and a few tiny morsels of pork belly. I guess when you tell them you’re not opposed to raw fish they take the light sear as lightly as possible. I think there was fennel in the chowder, too. 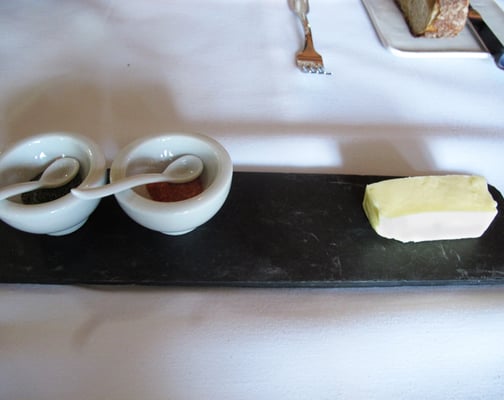 Next came a warm potato and onion bread served with what was either described a “belly butter” or “valley butter,” (I wasn’t really paying attention, it was just bread) herb salt and tomato salt. I had seconds because I’m a glutton for carbs.

Our third course was a soup made with egg, Matsutake mushrooms, and pea shoots, topped with a green foam that I believe was also made from either peas or the pea shoots. The egg was as close to raw as humanly possible, but that first bite of runny egg with the mushroom was one of my favorite bites of the entire meal. Delicious. My sister didn’t want her mushrooms so there was more for me. Mom told a funny story about how my sister’s distaste for mushrooms once led her to order Lo mein from a Chinese restaurant without mushrooms, and she wound up complaining that it tasted bad. Little did she know how much flavor they add…

The main course, our fourth course, was farm-raised veal with mixed glazed carrots and dandelion greens. I wish I could pet the little baby cow that was sacrificed for us to taste its sweet flesh because that was the best veal I’ve tasted. So soft, tender and succulent. The carrots and the glaze were a perfect compliment. The dandelion root added a touch of earthiness and bitterness. So awesome.

Before dessert I had a shot of espresso because I was getting tired (our meal lasted three-and-a-half hours) and I knew my sister was about to drag me out bar hopping even though I’d gotten off a plane 15 hours ago and barely slept.

Dessert was incredible: concord grape meringue with Stone Barns fruit and honey, and some edible flowers from the garden. Underneath the meringue was a cookie or graham cracker that, although small, added a whole lot to the dish. I don’t typically like honey — and this dessert was not light on honey — but I’ll be damned if the sweetness didn’t play flawlessly with the tart from the grape and the faint bitterness of the cookie. Texture, flavor, presentation, total perfection. The same could be said for the entire meal.

I’m not sure what else I can say about Blue Hill at Stone Barns other than it was easily one of the best, most-unique meals of my life. The setting, the service, the ambiance, the food, everything was ideal. The only regret I have is being a novice food writer, because now this review will forever be on the Internet and people with more developed palates and bigger food vocabularies will read it and be all like, “What’s THAT guy’s deal!? What is he, retarded?”